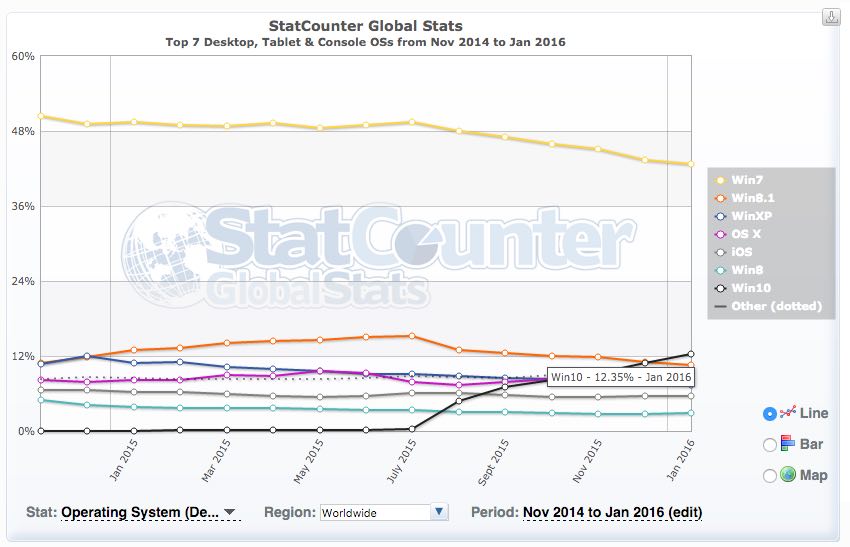 More than 200 million people are running Windows 10 on their PCs after just 6 months.

Some of their tactics have been criticised but according to the data provided by StatCounter, Windows 10 now runs on 12.46 percent computers, followed by Windows 8.1 with 10.33 percent share. Windows 7 still beats them all with 43.76 percent installations.

Microsoft has repeatedly stated its aim is to achieve 1 billion Windows 10 installations on all platforms — in the next 2-3 years.

Microsoft PCs with 7 or 8.1 have been showing GET WINDOWS 10 offers for some time. These are becoming bigger and don’t feature any option to reject the upgrade.

Next, Microsoft will make Windows 10 a recommended download in Windows Update.

This means, every time you use the Windows Update feature, Windows 10 will be shown as a recommended to download – so if don’t plan to give up your Windows 7 or 8.1 operating system — don’t install Windows Updates on your PCs before looking at the entire contents.

As I have said in a previous article, if you are running Windows 8 you might as well bow to the inevitable as Windows 10 is better than 8, but if you like Windows 7, then carry on for a while longer – you are still in good company, but watch for the steady Microsoft pressure.